With Thanksgiving arriving this week, I wish to thank you readers for your interest in City issues.  This week’s letter will discuss proposed legislation to create a standardized tax stabilization agreement, the settlement of outstanding litigation with the fire fighters, and the renaming of Magee Street to Bannister Street.

At Thursday’s City Council meeting, Councilman Salvatore introduced legislation to make a standardized tax stabilization agreement for businesses seeking to undertake substantial new development projects in the City.  It has the backing of a majority of City Council members (including me) and the Mayor.  The City’s commercial tax rate, one of the five highest of major cities in the country, has proven to be a major barrier to development.  Stabilization agreements provide developers with a “stabilization period” (typically 10 years from completion of construction), to raise the valuation from the pre-construction to the new level, effectively charging five years’ worth of taxes over the first decade.  (For larger projects of $50 million or more, the “stabilization period” can range up to 20 years, resulting in eleven years’ worth of taxes over that time.)  While this arrangement provides less revenue than full taxation, and creates a fairness issue with current “full rate” taxpayers, the City’s experience has confirmed that new development projects in  Providence at “full tax” rates are virtually impossible.  Currently, developers receive these agreements on a “one off” basis through the City Council’s Finance Committee, a difficult and often arbitrary process, that has harmed the City’s ability to attract businesses and development.  The legislation was assigned to the Finance Committee, which now has the responsibility to review and improve the ordinance as appropriate, and then return it to the full City Council for consideration.  In the coming weeks, we will learn whether the Finance Committee is willing and able to carry out this important responsibility.

Earlier this month, the administration announced an agreement with the fire fighters union leadership regarding two legal disputes remaining from the confrontations in 2015.  The first dispute involved an arbitration claim by union members when the administration’s unilateral change in shifts violated their rights under the existing contract.  The second dispute involved a longstanding claim by fire fighters to include seniority wage increases when calculating overtime pay.  The combined settlement will cost the City approximately $6 million, but the Internal Auditor had estimated a potentially higher number ($9 million), so the terms were fair to the City.  The agreement is now before the union’s membership, who will vote on the agreement in the coming weeks.  At Thursday’s meeting, the City Council approved a resolution endorsing the terms of the agreement, but the administration and fire fighters union have stated that the Council’s approval was not necessary.  Thursday’s approval vote makes this issue moot, but the situation could have been quite different if the proposed agreement were for $60 million instead of $6 million, and the City’s history includes unilateral decisions by prior Mayors that have harmed the City.  This is an institutional issue that I plan to address once the fire fighters’ rank and file adopt the agreement.

Over Veterans’ Day weekend, my wife Lauren and I visited the National Civil Rights Museum at the former Lorraine Motel in Memphis.  The museum reviews the nation’s civil rights history from slavery through the 1960’s under the leadership of Martin Luther King, Jr.  While most of that history took place in the southern United States, I found this display early in museum’s timeline: 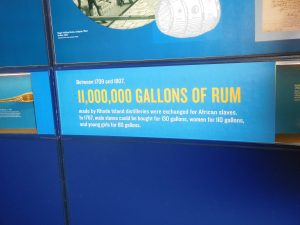 In this way, visitors to the Museum learn that America’s history of slavery is also Rhode Island’s history.  We cannot change that history, but on Thursday night the City Council changed the name of Magee Street, named after a slave trader who owned property on College Hill, to Bannister Street, to honor an African American couple who lived a few blocks away and who achieved great distinction 150 years ago.  On this small street, and in this small way, the City Council made a statement in support of the American value of justice for all, and to continue advancing Roger Williams’ mission to hold forth a lively experiment in our community.